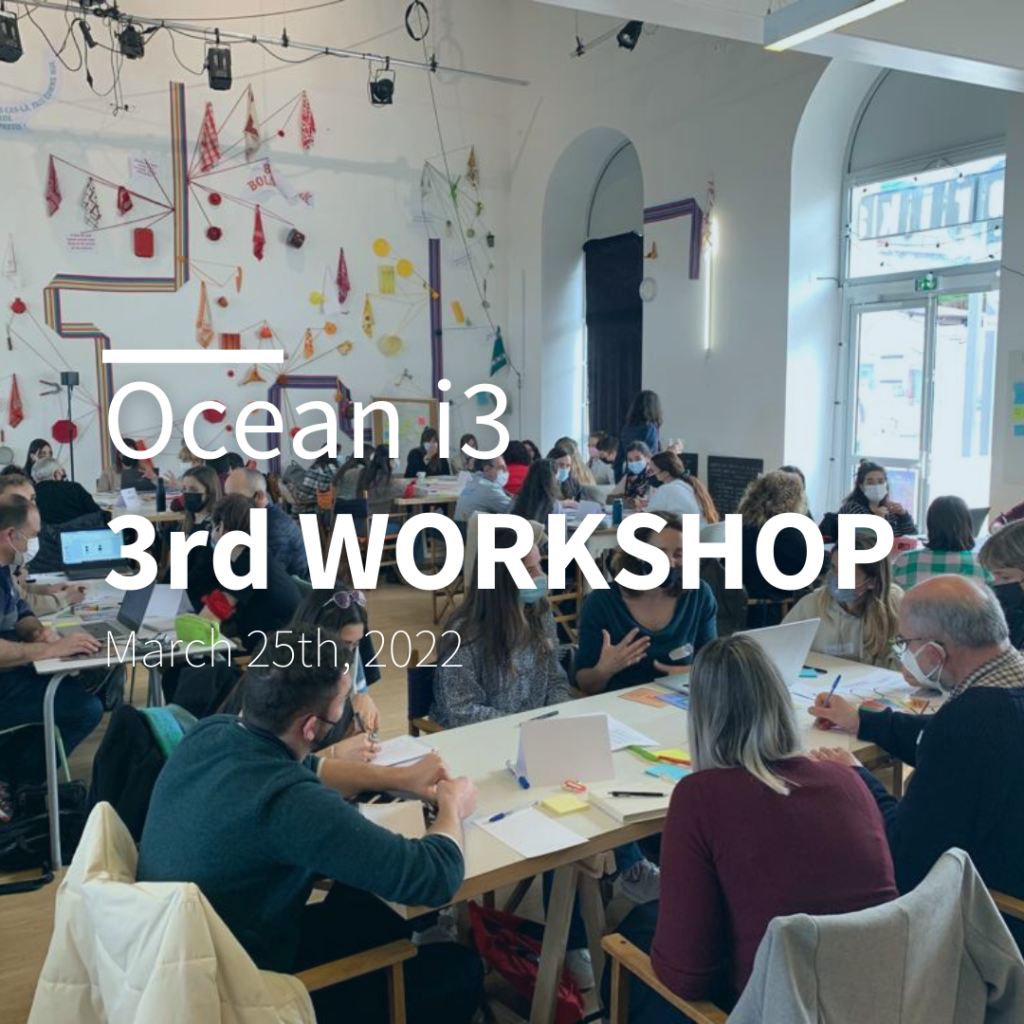 More than 60 people from the Ocean i3 community from Bilbao, Vitoria, San Sebastian, Bordeaux, Bayonne and La Rochelle gathered in Hendaye last Friday, March 25, for the first face-to-face workshop of the 21-22 course.

After two years without being able to hold a face-to-face workshop, students, teachers and socio-economic agents were finally able to meet face to face at the Borderline Fabrika in Hendaye. The location, situated at the Hendaye train station, provided a sense of transit, of movement, something that represents this project in which we are continually advancing and progressing in the fight for the reduction of plastics and microplastics on our coast.

Slogan on the sweatshirt of the TEO social agent, La Rochelle.

Upon arrival, people filled out a card with their information and characteristics that define them. They then pasted them on a “relationship mural”, which led to the first conversations and the search for points in common. After this first contact, an activity was carried out with music for the collective construction of the Ocean i3 multilingual glossary. The aim of the glossary is to share key concepts of the project in 4 languages (Basque, French, Spanish and English).  Action, teamwork, enthusiasm, innovation and solidarity were some of the concepts that were noted down.

“Relationship mural” and Ocean i3 glossary.

Throughout the morning, we were able to continue getting to know each other better and enjoyed a cup of coffee. It allowed us to continue talking and creating connections. Then we continued with the next phase of the workshop: team work.

Students had some time to share their improvements in their individual project (TFG, tutored project, etc.), and then each group shared with their social agent the progress in the team projects to respond to the proposed challenges. Teams continued working and developing the projects and finally, they decided and distributed the next tasks.  Finally, each team made a short presentation to the whole community about what they had worked on during the day.

During the workshop, multilingual communication was developed and the free use of each participant’s preferred language was encouraged.  It was a perfect opportunity to continue raising awareness about language and to put into practice the tools contained in the Language Policy.

In addition, we had the help of the UPV/EHU Translation and Interpreting students, who simultaneously translated everything that was being shared in plenary. They also played the role of “whisperers” at each table, that is, they were in charge of making more specific or personalized translations for those people who needed it, ensuring a fluid and effective communication. In order to be more easily identified, they wore a red scarf tied around their arms.

Translation and Interpreting students at the preliminary briefing.

Thanks to the collaboration of agents, students and teachers, the workshop was a complete success.  In particular, we would like to appreciate the commitment of the agents of T.E.O. cooperative who traveled from La Rochelle to attend. Thank you very much to all of you!

Ocean i3 community during the 3rd workshop 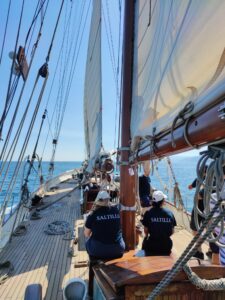 The summer course aboard the Saltillo ends succesfully!

On Wednesday, July 20, the crew of the Saltillo disembarked in Santurtzi, and attended the press conference held at the School of Nautical Engineering of the UPV/EHU. 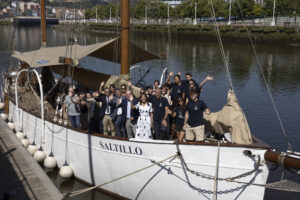 THE SUMMER COURSE ABOARD THE SALTILLO TRAINING SHIP BEGINS: Sailing through knowledge

On Tuesday, July 12, the official presentation of the crossing of the Saltillo, ship of the University of the Basque Country UPV/EHU, took place at the Itsasmuseum in Bilbao.

Seguir leyendo »
14/07/2022
Prevseguir leyendo 2nd workshop completed!
NextEMBARK ON THIS EXCITING TRAINING EXPERIENCE ON BOARD THE TRAINING SHIP SALTILLO!Next
This website uses cookies and similar technologies that store and retrieve information when you browse. In general, these technologies can serve very different purposes, such as, for example, recognizing you as a user, obtaining information about your browsing habits or customizing the way the content is displayed. More information about our cookie policys
Cookie SettingsAccept all
Reconfigure cookies